What's New on the Isle of Palms

We are fully into a new year, and it’s feeling good. There’s something about starting afresh that gives a burst of wind in your sails as we go full steam ahead, to mix boat metaphors. It’s particularly welcome after the very surreal pandemic era we’ve all been through.

Signs of things getting back to normal are popping up at a refreshing clip. Spoleto just announced their new schedule for the 2022 festival, and it’s a full one  -  the first time since 2019. They’re offering up a full slate of over 120 events, including three operas. Tickets officially go on sale soon.

The SC Aquarium is a gem in Charleston’s crown, a popular draw for visitors and locals alike. They just announced a fun new “after hours” series of events for the 21 and over set, where you can sip, nosh, listen to music and enjoy the Aquarium after doors close to the public. They’ll host five different ones during the coming year, starting off with OysterFest, a Lowcountry oyster roast on the terrace overlooking Charleston Harbor. Read all about After Hours at the Aquarium here.

Here at Exclusive Properties, we’re constantly on the lookout for terrific homes to add to our portfolio. Our aim is to provide you with access to the very best places on the IOP, so you truly experience island life in style.

We also try to provide a variety from which to choose. Our homes range in size from four to eleven bedrooms, vary from oceanfront to inland, with options at all different levels to match your budget.  Some are ultra-luxurious, some romantic, some with fun themed rooms that the kids will love.

We’ve just added a new home that is unlike any other.  Its name gives a hint why. 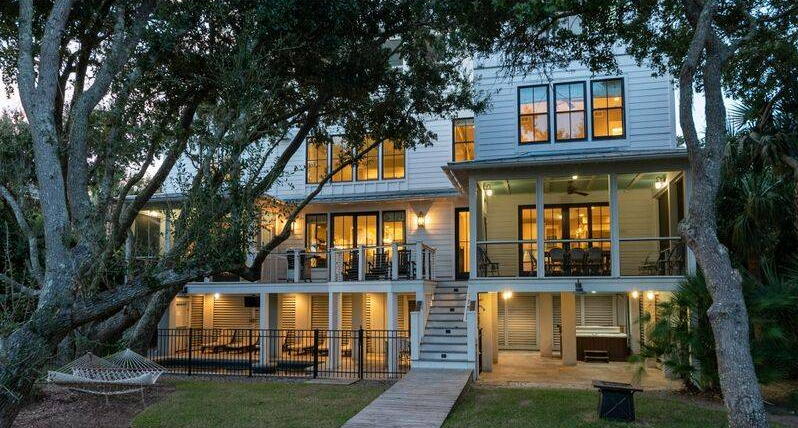 Welcome to The Tree House

New to our collection is an elegant oceanfront home that is nestled in a canopy of majestic live oak trees  -  one of the hallmarks of the Lowcountry.

The Tree House is located at 3206 Palm Boulevard and has seven bedrooms, six full baths and two half baths. It has a beautiful open concept design spread over three levels, with an elevator connecting the garage to all three.

The first floor has plenty of light and space, with floor- to-vaulted ceiling windows, a gourmet kitchen, open living and dining areas both inside and out.  There’s also the master suite with private bath and deck, as well as a mother-in-law suite with wet bar and pool table.

Bedrooms continue on the second floor with four more, plus the seventh located up another level.  Also on the top level is a cool rooftop relaxation space with comfy seating, TV and stellar views.

Back on the ground, the Tree House has a private walkway to the beach, a heatable pool with underwater seating, plus a six-person hot tub and outdoor lounging areas.

Come and play in the Tree House!

For almost two decades, Morgan Creek Grill was an Isle of Palms staple.  Situated in an absolutely gorgeous spot on the island, it sat right on the water where the Intracoastal waterway meets the IOP Marina, at 80 41st Avenue.  Its sunset views were sublime.

Not only did Morgan Creek offer lunch, dinner and its beloved Creekside Bar, it also hosted loads of live music, plus countless special events throughout the year like oyster roasts, holiday dinners, BBQ pig roasts, and world music fests.  It was a place where locals and visitors alike met, mixed and had a great time.

Alas, Morgan Creek Grill closed just prior to the pandemic, in November 2019.  It’s been vacant ever since.

The location is so prime, the City of Isle of Palms owns it.  They decided to put out bids for a new establishment there, one that would benefit the IOP and bring back some of that good coastal food and island hospitality.

Well, the winning bidder is the talented team behind Mex 1 Coastal Cantina, Dave and Chrissy Lorenz.  Mex 1 Coastal Cantina is a hopping local eatery that’s proved so popular it’s expanded to three locations  -  Sullivan’s Island, Mount Pleasant and West Ashley.  They’ve joined forces with another person with years of restaurant experience, Jon Bushnell, to come up with a great concept for the Morgan Creek Grill site.

Significantly, all three are Isle of Palms residents.  Their team beat out other bidders including the folks that own Wild Dunes Resort on the island, and are based way out in Los Angeles.

Dave Lorenz of the winning group said he wanted to create a place “by Islanders, for Islanders… That’s what we’re going to bring back, is that kind of neighborhood feel.”

The new restaurant will be called “Islander 71 Fish House & Deck Bar” and will open early this spring.  Its menu hasn’t been released yet but will be classic fish house, featuring locally-sourced and affordable seafood.  The name is a nod to the 1970’s, when the Isle of Palms’ popularity really started to take off.

They’ve been hard at work doing massive renovations of the building, basically gutting it and starting anew.  Improvements include a huge two-story deck overlooking the water, so half of the 323-person seating will now be outside and have terrific views.  There will be a 30-seat outdoor bar with eight TVs, as well as a large outdoor area for live music and special events like oyster roasts.

So on your next visit to the IOP, why not stay in a luxurious tree house, then grab a bite and a beverage at a new restaurant on the water.