It’s a beloved icon of the Lowcountry  -  indeed, the country. It’s a living thing.

In fact, it’s believed to be one of the oldest living things in America. It’s estimated to be twice as old as the United States, and maybe much older - possibly as old as 1,500 years.

Of course, I’m talking about Angel Oak, a massive live oak tree that’s located on Johns Island, a couple islands past the peninsula, and on the way to Kiawah.

Why go see a tree?

When people visit the Charleston area, they often ask, “What are the must-see things to see and do while visiting theLowcountry?” 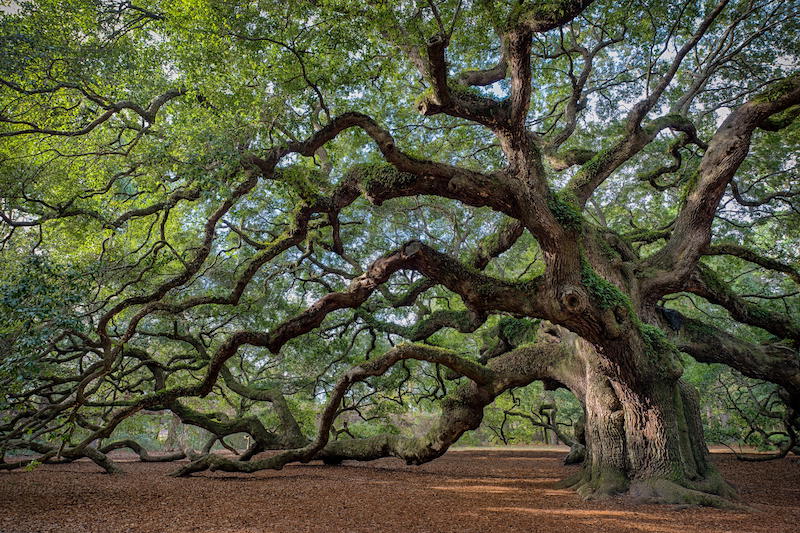 There are the obvious answers, places like the downtown historic district, the City Market, the SC Aquarium with its sea turtle hospital, Fort Sumter, Boone Hall, or maybe Magnolia Plantation.

It might seem wacky, but one of the coolest things that I always recommend to guests visiting Charleston, is going to see a tree.  It’s hard to explain to people why. You just have to go see it in person to really understand and get a true sense of its scale, and its amazingness.

In the meantime, check out its stats, which are downright impressive. Angel Oak is 187 feet wide measuring across the branch tips and stands about 67 feet tall. The trunk is a whopping 28 feet in circumference. Its canopy provides more than 17,200 square feet of shade. Its limbs are so long, many of them rest on the ground.

One of the “Most Beautiful Places in Ame

Charleston and the Lowcountry are darlings of “Best of” rankings - whether it’s the best city to visit, best restaurants to eat in, or most polite people to hang around with. But the natural beauty around here is par excellence, and a recent ranking confirms it.

An online entity called the Discoverer Blog created one entitled the “15 Most Beautiful Places in the United States.”  They are all sites of exceptional natural beauty.  The list includes beloved giants (and in many cases, the country’s most popular national parks) like Yosemite, the Grand Tetons, Sequoia National Park, and Kauai’s famed Na Pali Coast in Hawaii.

And lo and behold, one of the most beautiful places on the list basically consists of one tree.  Angel Oak, of course.

Angel Oak is wildly popular, attracting more than 400,000 visitors a year.  Some days they get more than 3,000 folks coming to see it.  It sits in a small four-acre fenced park that, while not in the city limits of Charleston, has been owned by the City since 1991.  There’s a small gift shop, restrooms and parking near the tree.  It’s absolutely free to visit.

For centuries it’s been protected by a large maritime forest that surrounds Angel Oak, giving it a serene, sanctuary-like setting.

Land in the Lowcountry has become extremely valuable, and it wasn’t long before developers swooped in. They got approval to tear down the surrounding forest and build 500 apartments along with retail and single family homes --- only about 160 yards away from Angel Oak.

It was devastating news. The tree’s root system likely would be threatened, as it extends great distances beneath the ground.  Experts believed it might endanger the life of the tree itself.

The development was basically a done deal, with just a couple of permits and final design approval left before breaking ground.

Well, the fight to “Save the Angel Oak” began in earnest. Thanks to many years of tireless work by several angels - including activist Samantha Siegel, the Coastal Conservation League, the South Carolina Environmental Law Project, Charleston City and County, the Charleston County Greenbelt Program, 12,000 donors (including many schoolchildren), and the Lowcountry Land Trust  -  the effort to stop the development finally succeeded. They fought the permits in court and raised enough money ($7 million) for the Lowcountry Land Trust to purchase the land - over 35 acres - and thus preserve it for future generations.

What started as just a four-acre park, has now been expanded into 44 acres of nature preserve. Its noble goal is to ensure the health of the tree and to improve the experience of those who come to visit.

The Lowcountry Land Trust and the City of Charleston are on a roll.  The plans they have for the Angel Oak Preserve are exciting and are well underway, with landscape architects and arborists hard at work.

This is good news, indeed.  One of our nation’s national treasures will hopefully be preserved for generations to come.

So check out Angel Oak in person, and find out firsthand how special it really is.  It’s located at 3688 Angel Oak Road, Johns Island… in the middle of a beautiful forest.