More Ways To Fly To Charleston

Now that life is getting back to normal, flying has taken off once again.  Airline bookings have rebounded like crazy, with folks eager to travel after more than a year of staying home.

And now there are more ways than ever to get to and from Charleston International Airport.

Charleston International, or CHS as it’s known in airport circles, has experienced a major boom in recent years.  First, it underwent a massive $200 million renovation, which greatly improved its form and function.  New elements included an expanded terminal, new baggage carousels, security area, a huge central atrium filled with natural light, and plenty of new shops and food spots with a local flavor.

But they didn’t stop there.  As I blogged about recently, CHS is embarking on yet another expansion, this one costing $305 million.  It will take part in six phases.  The first one, a $100 million five-level parking garage that will also house rental car companies, is already up and running and is working like a charm. Coming down the pike: expanding the main airline ticket hall, fuel depot, police department annex, repaving the parking apron for passenger jets, and ultimately adding an entire third concourse to the airport.

More flights than ever

As the airport expands, so do the options to fly in and out of Charleston.  Nine major carriers have been serving CHS.  They include American, United, Delta, Southwest, JetBlue, Alaska, Allegiant, Frontier and Silver.

United Airlines recently made a big announcement.  They’ve added nonstop service between Charleston and six cities in the Midwest.  The move adds a total of 18 new flights per week to United’s schedule, and it more than doubles their nonstop options from Charleston.  Five of the six routes will be on the CRJ-550 premium-heavy aircraft, complete with First Class, Economy Plus and Economy sections.

The six new nonstop destinations from Charleston are:

As Helen Hill, CEO of Explore Charleston, observed: “Ohio has consistently been one of the top states of origin for visitors to the Lowcountry.  We’re excited to welcome our inaugural nonstop service to Milwaukee as well as additional options for Indianapolis and Pittsburgh residents to conveniently enjoy our region’s unparalleled attributes.  Simultaneously, we realize these flights improve access for Charleston-area residents with family, friends, and business contacts in these markets.” 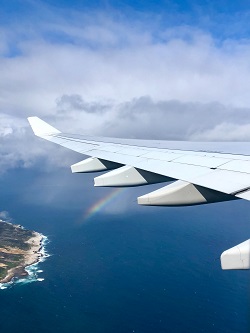 That’s not the only good news on the flying front.

In a major announcement, a brand new airline has formed, and it has picked Charleston as one of its four major “focus city” hubs.

It’s called Breeze Airways, and it was founded by the man who started JetBlue, David Neeleman.

His goal for Breeze is this: to “get you there in half the time, at half the price.”  That’s a pretty good goal for those of us flying to and from the Holy City.

Breeze will be offering eleven different destinations for Charleston  -  seven of them brand new.

Besides Charleston, Breeze Airway’s other focus cities are Tampa, Norfolk and New Orleans.

Not only is Breeze expanding the nonstop flight options to and from Charleston, it’s also ushering in some fantastic fares.  They’re offering $39 one-way flights to kick things off.

Ultimately, most tickets will come in at under a hundred bucks.  They’ll have three classes of fares:  “Nice” (the least expensive, equivalent to basic economy), “Nicer” (assigned seating, with more legroom, and no charge for a checked bag), and “Nicest” (with even more room and perks like WI-FI).  They won’t charge if you need to change or cancel a flight, and the flight credit will be good for two years.

Initially, Breeze will fly Embraer 190 and 195 aircraft, which hold over 100 people and have no middle seats.  They’ll offer inflight service with nibbles like UTZ potato chips and Kind bars.  By the end of the year, they’ll be switching over to larger and even more comfortable Airbus A220 jets with WI-FI and Business Class sections.

Breeze Airways has also launched a brand new app to make traveling with them a, well, breeze.

So go ahead and hop on a flight to or from Charleston.  There are more options than ever before.