2nd Sundays on King Street is Back!

One of downtown Charleston’s favorite recurring events, 2nd Sunday on King Street, is about to make a grand return to Charleston. The pandemic has thrown such a gigantic wrench into just about everyone’s lives and schedules. It’s so nice to see some enjoyable activities are coming back.

A big part of King Street downtown is closed off to vehicular traffic - allowing pedestrians and canines only - on the second Sunday afternoon of each month, between 1:00 p.m. and 5:00 p.m. The cordoned-off area begins where King crosses Calhoun Street at Marion Square, then stretches all the way down to the place where it crosses Queen Street. Local restaurants set up tables on the street, there are plenty of street musicians, booths, food and other vendors all along the way.

2nd Sunday on King is a monthly event that began way back in October of 2010, and it quickly became a hugely popular event, drawing between 12,000 and 18,000 people at a clip. Then the pandemic hit. It’s been 18 long months since the last 2nd Sunday on King took place.

2nd Sunday on King is managed and produced by the nonprofit, Charleston Peninsula Preservation Trust, also known as CPPT.  Its president Susan Lucas had this to say:  “We’re very excited to re-start 2nd Sunday. It’s been sorely missed by the downtown retail and dining establishments and the thousands of local and regional visitors who come to stroll, shop, dine and enjoy Charleston’s ‘Main Street’ on a vehicle-free, pedestrian-only afternoon.” 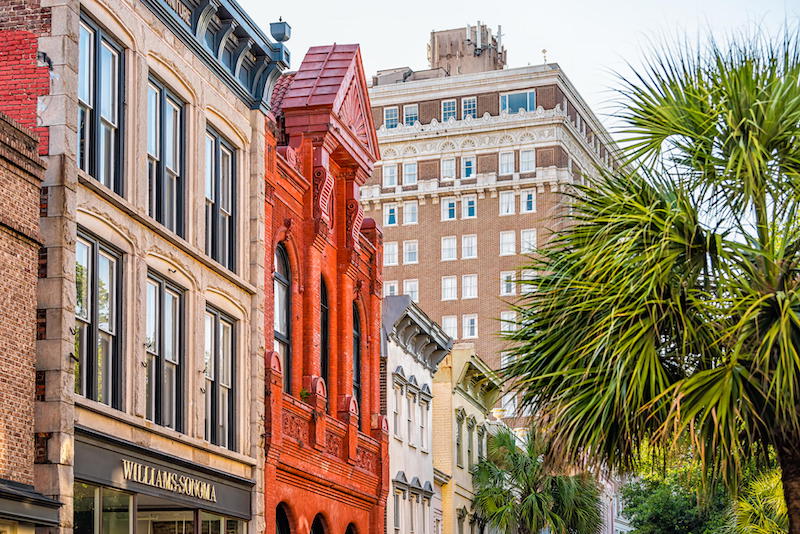 King Street in Charletson has been named one of America’s Top Ten Great Streets. This accolade was bestowed by the American Planning Association as part of their “Great Places in America” awards, considered the “gold standard.”

These are serious folks who know a thing or two about urban spaces. Other streets on their top ten list included Pennsylvania Avenue in Washington D.C., Broadway in New York City, and West Palm Beach’s Clematis Street.  As for King Street here in Charleston, they singled out the section stretching from Broad Street north to Spring Street.

U.S. News and World Report’s Travel section also came up with a list of the ten best shopping streets in America. King Street made the list, along with Fifth Avenue in New York and Rodeo Drive in Beverly Hills.

Why is King So Terrific?

The College of Charleston’ s College of Urban Studies decided to tackle that question. They compiled a list of the main attributes which make King Street such a good place. According to their findings, King Street…

3.   blends seamlessly into its surroundings;

7.   fosters an agglomeration of economies.

It’s interesting to note that King wasn’t always such a thriving street. The development of Charleston Place, which opened in 1986, sparked a dramatic renewal in the area. That spark ignited and rapidly spread all the way up the street to Upper King, north of Marion Square, bringing energy and life along with it.

King Street has so much to offer these days, with plenty of boutiques, art galleries, eclectic shops, some of the best restaurants in America, night spots, taprooms and more. It’s a very walkable street, with the huge green space of Marion Square right in its midst.

Marion Square’s the site of so many great happenings, from the weekly Charleston Farmer’s Market to special events like the Cooper River Bridge Run afterparty, Charleston Wine + Food Festival and SEWE.

As for the best place to park for 2nd Sundays, a smart option is to use one of several parking garages run by the City of Charleston. This way you can avoid the hot sun and park your car in the shade, unless you happen to park on the very top level. As a nice bonus, the City has offered two hours of free parking in most of their garages during 2nd Sundays with a voucher. They often post vouchers online to download right before each event. They also have free parking paper vouchers available on a first-come, first-served basis at the official 2nd Sunday booth along King Street.

So check out 2nd Sunday on King, when it makes its reappearance on September 12th… and hopefully every 2nd Sunday after that.