The weather is turning cooler on Isle of Palms, and the months have an “r” in there. Here in coastal South Carolina, that means oyster season has officially arrived.

The oysters in the waters around Charleston grow in clusters. According to bivalve aficionados, they have a distinct and quite delicious flavor.  It’s been likened to experiencing the sea with each bite.

The Lowcountry is all about this delectable mollusk. They’re a huge part of our local culture and are the centerpiece of the classic coastal party: the oyster roast.

Gather with friends and family around a steaming mound of fresh oysters. Crack open a cold one, grab a glove and an oyster knife, and go at it.  Start shucking at the communal table, tossing the shells into the hole in the middle of the plywood. It’s a terrific bonding experience.

Saltines and cocktail sauce are optional. A nice accompanying beverage is not!

A bit of Oyster History Around These Parts

The way oysters grow is an interesting tale that weaves both nature and history together.

South Carolina used to have a huge oyster industry. Back in the 1930’s, 16 different canneries lined the SC coast. They harvested, shucked and shipped oysters to large cities like New York, Chicago and beyond.

Locals doing the harvesting understood the natural process beneath it all. They knew that oysters need a cultch, or base, on which to attach then regrow. It takes about three months for the baby oysters (“spats”) to attach. It then takes two to three years for an oyster to grow to three inches, which is when it’s considered ready for harvest.

The people running and working in the oyster canneries also understood the cycle. They knew they needed to return the shells back to the water so everything would come full circle.

The Lowcountry oyster market switched to a more local one. Whole cluster oysters basically stayed here and were consumed and appreciated, in individual back yards and at benefit parties.

People around here would wisely say this is progress.  (Local before local was cool.) Why ship ‘em up north when we can keep there here for us, or those coming to visit?

The problem was, most of the shells just ended up in the landfill instead of back in the saltwater and tidal creeks where they belong.  Soon it became apparent that oyster beds were disappearing.

So in the 1980’s, the South Carolina Department of Natural Resources tackled the problem.  They started an oyster bed seeding program, which has seen great results.  Also helping to turn the tide (so to speak) is their oyster shell recycling program, which they began in 2000.  Both have grown steadily ever since, just like the oyster beds they are meant to nurture.  So when folks host oyster roasts around here, most do their part and recycle the shells. 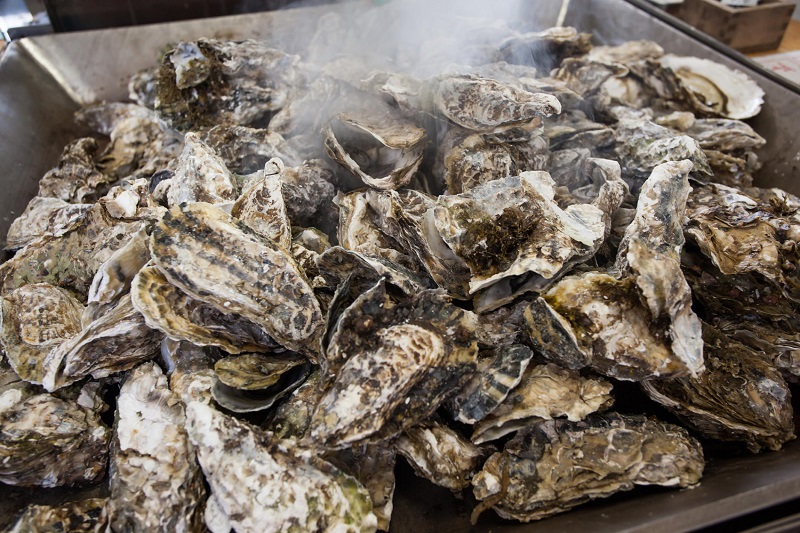 How much do we love oysters around here? Well, the largest oyster festival on the planet happens right here in the Lowcountry.  In fact, they serve up 80,000 pounds of ‘em.

It’s the beloved Lowcountry Oyster Festival, and it’s been going on for decades. The pandemic caused it to skip a year, but it’ll be back in early 2022. The next one is scheduled for Sunday, February 6th from 10:00 a.m. till 5:00 p.m.

The Oyster Festival’s been ranked as one of the top 20 events in the southeast, according to the Southeastern Tourism Society.  Besides boasting those massive amounts of mollusks, it also hosts oyster eating and oyster shucking contests, plenty of live music, beer, wine, an extensive food court with lots of other eating options from area restaurants, and a large kids’ area.

Plus, the venue is super cool.  It takes place right on the grounds of the historic and beautiful Boone Hall Plantation in Mount Pleasant.  If you’re staying here on the Isle of Palms, just cross over the IOP Connector, turn right onto Highway 17North, and follow the signs to Boone Hall.

Where to eat them now?

Keep an eye peeled on the calendar as oyster roast benefits start popping up this time of year.  Here on the Isle of Palms, The Dinghy hosts oyster roasts every Thursday night at 6:30 during oyster season.  It’s located at 8 J.C. Long Boulevard, just down from Exclusive Properties’ office.

You can also head over the Ashley River to Bowen’s Island, a funky dive place on the way to Folly that’s worth the drive.  They’ve been cooking up fresh seafood and some of the best local oysters around ever since 1946.  Great marsh views, too.

Or, prepare them at home…

You may also decide to stay in and prepare your own oysters in your beach house. If so, here’s an easy recipe from one of Charleston’s legendary chefs, Frank Lee of Maverick Southern Kitchens/Slightly North of Broad fame.

Mix herbs and lemon with softened butter. Roll into logs in wax paper and refrigerate or freeze.

To prepare, top good quality shucked oysters on the half shell with a generous amount of the herb butter. Broil or bake at high heat until butter melts and oysters crinkle.

NOTE: Compound butter is a delicious topping on most any fresh fish or shellfish, especially when broiled.