May Means Loggerheads on the Isle of Palms!

The month of May means that loggerhead turtles are returning to the beaches of Isle of Palms… much like the many visitors who come to the Isle of Palms for a beach getaway.

Loggerheads, whose Latin name is Caretta caretta, are majestic giants of the ocean. Beloved annual callers who come to our shores, they’ve become the honorary mascot of the Lowcountry.

A few years ago, many giant blank loggerhead sculptures were given to area artists on Isle of Palms to paint as they saw fit. Their colorful, fanciful and elaborate creations were auctioned off for the benefit of the turtles. Keep an eye peeled and you’ll spot a few of them proudly displayed around the island. 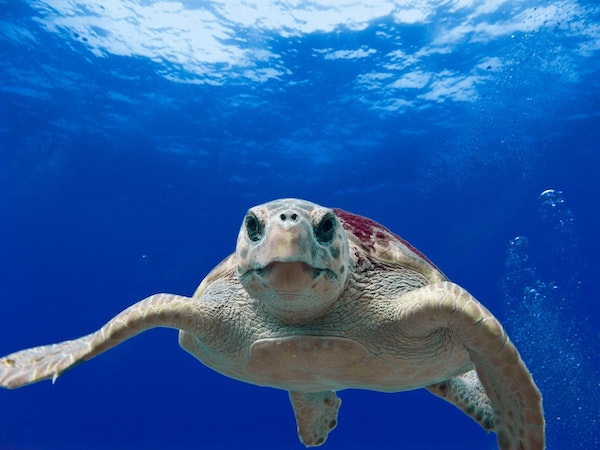 The beginning of May through the end of October is considered the official nesting season of the loggerhead turtle on Isle of Palms.

For many years, the population of loggerheads and other sea turtles was in serious decline. They fell victim to loss of habitat, boat strikes, disease, pollution of many kinds, and other factors – most of them manmade.

Fortunately, people finally woke up to just how dire the situation had become. Both public and private entities sprang into action.

Thanks to the good work of the Department of Natural Resources, the South Carolina Aquarium, the Sea Turtle Hospital, area Turtle Teams, countless dedicated staff and volunteers, educators and many others, their numbers are rebounding nicely.

South Carolina is second only to Florida in the number of sea turtle nests that are laid on its beaches each year.  Typically, a thousand or more turtle nests are laid along the coast of South Carolina, which totals just 190 miles in length (a fraction of Florida’s coastline).

Loggerheads are smart creatures  -  they know that the beaches of SC are a great place to be!

The beginning of May is the official start of the nesting season, but usually the first nest will appear around Mother’s Day. If you’re here visiting, keep an eye peeled for a turtle nest cordoned off in the dunes. Each nest holds an average of 120 eggs.

What We Can Do To Help 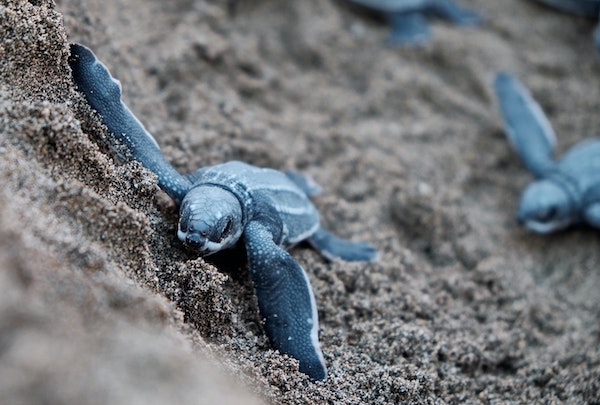 Although the number of loggerhead nests is encouraging, there’s still a lot we can and should do to help insure their survival.  It boils down to three main things.

1)  Give them a wide berth and plenty of space.

The City of Isle of Palms has written several guidelines into law, offering protection to these magnificent creatures.  They include:

No personal property shall be located within 25 feet of any emergency beach access or any turtle nest.

In addition to any other applicable State or Federal laws, no person shall physically harm, harass, or otherwise disturb any sea turtle (including eggs and hatchlings) or any sea bird (including eggs and young). Beached or stranded sea turtles, whales, or dolphins shall be reported immediately to the City Police Department.

It shall be unlawful for any person to allow a dog to disturb nesting sea turtle, turtle nests or turtle hatchlings.

When you come to the beach, it’s fun to dig in the sand.  Dig to your heart’s content!  But when you’re done and before you head home, PLEASE be sure to fill in any holes in the sand.  A mama turtle that crawls onto shore to lay her eggs might fall into the hole and get injured or confused.

By the way, filling in holes in the sand is kind for your fellow human beings, too.  They are a serious hazard for people walking or running on the beach after dark.

3)  Lights Out for Loggerheads

If you’re staying in here on the Isle of Palms, there’s something very simple you can do to help insure the health and safety of loggerheads.  It’s important enough that the IOP has written it into their ordinances as well.

All exterior lights facing the beach must be turned off from sunset to sunrise during turtle nesting season.

Why?  Because artificial lighting confuses the baby hatchlings as well as the mother turtles. They mistake it for the reflection of the moon and stars off the ocean, which they use to navigate back toward the water.

Keep in mind that even flashlights and any small lighting visible from the water or beach can spell disaster for the turtles. Please limit the use of those as well.

To Find Out More…

SCDNR is a font of information on the loggerhead and other nesting sea turtles. Find out all about their SC Marine Turtle Conservation Program here.

Also, the Island Turtle Team is an awesome, dedicated group of volunteers here on the barrier islands near Charleston. They monitor the nests, count the eggs, move them when necessary, transport injured turtles to the Aquarium’s hospital, and basically do anything and everything needed to help them survive.  Their website has plenty of stats about this and past years’ nesting seasons.

So please help us help the sea turtles survive and thrive. They are an important part of what makes the Lowcountry coast such a delightful place to visit.